Our goal is to provide a place for women to listen to – and participate in! – conversations about things that really affect their daily lives. We are dedicated to empowering women to decide for themselves what those issues are, not society.

We want to illuminate the injustices and inequalities that surround women’s lives – from the smallest annoyances (think the waiter who assumes the man will be paying), to demeaning offences we endure every day (you know, like that boss who brushes your breasts while dangling your livelihood in your face), all the way to the most atrocious violations happening to women across the planet (sex trafficking, slavery etc.).

This show is our platform to inspire women to have a stronger, louder voice within the world.

But we’re not always so serious! Believe us, we get the power of a good, deep belly laugh! We’re definitely going to mix in some humor along with great questions and intelligence to address the tough topics that need to be discussed in order to tear down the wall that stands between women and equality in the world.

Many of our episodes are going to feature questions and concerns that we typically never say aloud – even to our closest girlfriends. We’ve been friends for a long time, but you’ll get to hear us going to some pretty entertaining places with each other for the first time!

Angela and Nicolle (aka Toni Vizard on the show!)

Who Are These Fabulous Women, You Ask? 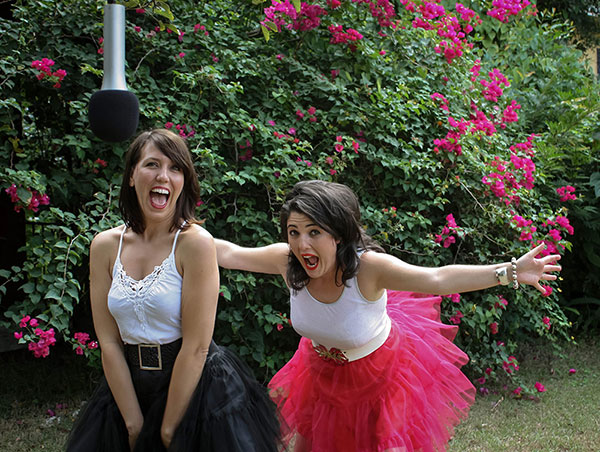 Nicolle Masters is a woman who enjoys strong black tea, writing, and spending time with family and friends. She’s a planner who loves making life moments into special events.

She studied acting and drama and has a BA in Dramatic Art from The University of North Carolina at Chapel Hill. Her professional background includes marketing and sales in the restaurant, transportation, and event industry. She has a passion for speaking out against inequality, connecting with others, and helping change the world for the better by using the creative arts. Through teaching, writing and the show, she gets to live her dream.

She’s a firecracker! Nicolle uses her creativity, ingenuity, and a hearty laugh to get through life… and it works!

Angela is a sentimental woman who cries during coffee commercials and whenever people come together for a cause. She loves everything Joss Whedon touches! You’ll find she’s a bit of a dork.

She has spent much of her professional life in customer service, honing interpersonal skills and coordinating team dynamics. She has a passion for ending shame and validating others on their journey of self-love.

Angela holds her place in the world with fair-mindedness, intelligence, and a corny sense of humor.

They have been friends and artistic partners since 2005. Their first creative endeavor was producing the play To Silence Me is To Silence…, written by Nicolle Masters (“Toni”), in the 2006 Orlando International Fringe Festival.

To Silence Me is To Silence… tells the story of one young woman’s struggle of surviving childhood sexual abuse. It is raw, provocative, and inspires people to share their stories of survival.

Several years later, they were back in the saddle, producing another riveting performance called Breaking Plates. This show allowed them to collaborate with other amazing women in an effort to bring more awareness to childhood sexual abuse.

Breaking Plates was received by a standing-room only audience that followed the writers and the actresses outside, post-performance, to break plates of their own in the name of themselves or any other woman/ man they knew who had been sexually abused.

It was an amazing cacophony of smashing plates and applause…such a release for everyone!

And in 2013, here they are – together again! – to fight for even more awareness of women’s rights and equality in this world. They started this show, Vagina Chronicles Podcast, to amplify their shared vision of womanhood’s place in this world. They are thrilled to be bringing such a great and intelligent show to women in their twenties, thirties and beyond.

Angela and Toinette can be contacted for speaking engagements at: